Fiend Without a Face (The Criterion Collection) 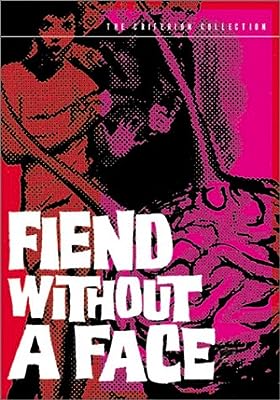 Price: $39.95
As of 2021-07-22 16:39:32 UTC (more info)
Product prices and availability are accurate as of 2021-07-22 16:39:32 UTC and are subject to change. Any price and availability information displayed on http://www.amazon.com/ at the time of purchase will apply to the purchase of this product.
Availability: Not Available - stock arriving soon
Buy Now from Amazon
Product Information (more info)
CERTAIN CONTENT THAT APPEARS ON THIS SITE COMES FROM AMAZON SERVICES LLC. THIS CONTENT IS PROVIDED 'AS IS' AND IS SUBJECT TO CHANGE OR REMOVAL AT ANY TIME.

Fiend Without a Face contains one of the most indelible images to emerge from sci-fi/horror movies of the atomic age: malevolent human brains, creeping like caterpillars on spinal-cord tails, choking the life out of their helpless victims! If that weren't enough to make any genre enthusiast drool with sick delight, the movie's also got an above-average plot (as B-movies go) and made genre history as an international success, independently produced in England, set in Canada, starring an American (Marshall Thompson), with magnificently grotesque special effects created in Germany!

The mystery begins near an American Air Force base in Manitoba, where unexplainable deaths are somehow connected to the base's atomic reactor, which is being used to power an experiment in advanced long-distance radar. Thompson (who later starred in the TV series Daktari) plays Major Cummings, who discovers that the lethal monsters--slurping, unseen "mental vampires"--are actually the horrific byproduct of thought-control experiments conducted by hapless, retired professor (echoes of Forbidden Planet's "monster from the Id"). Once visible, the fiendish brains are everywhere, attacking our heroes from every angle (in a scene that may have inspired Night of the Living Dead), and sputtering puddles of blood when riddled by bullets. This climactic scene--a triumph of latex rubber fiends, eerie sound effects, and stop-motion animation--was a gory breakthrough in 1958, and it's still a worthy precursor to every gross-out monster movie that followed in its trendsetting wake. Beware the faceless fiends! --Jeff Shannon

Fishing With John (The Criterion Collect...