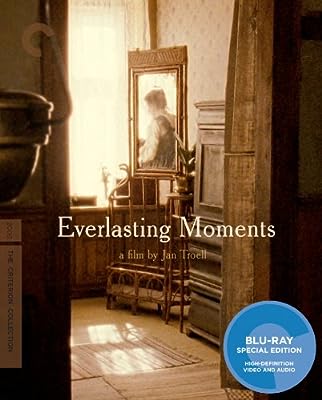 Price: $27.99
As of 2021-09-19 05:06:42 UTC (more info)
Product prices and availability are accurate as of 2021-09-19 05:06:42 UTC and are subject to change. Any price and availability information displayed on http://www.amazon.com/ at the time of purchase will apply to the purchase of this product.
Availability: Not Available - stock arriving soon
Buy Now from Amazon
Product Information (more info)
CERTAIN CONTENT THAT APPEARS ON THIS SITE COMES FROM AMAZON SERVICES LLC. THIS CONTENT IS PROVIDED 'AS IS' AND IS SUBJECT TO CHANGE OR REMOVAL AT ANY TIME.

Swedish master Jan Troell, director of the beloved classics The Emigrants and The New Land, returns triumphantly with Everlasting Moments, the vivid, heartrending story of a woman liberated by art at the beginning of the twentieth century. Though poor and abused by her alcoholic husband, Maria Larsson (Maria Heiskanen, in a beautifully nuanced portrayal) finds an outlet in photography, which opens up her world for the first time. With a burnished bronze tint that evokes faded photographs, and a broad empathetic palette, Everlasting Momentsbased on a true storyis a miraculous tribute to the power of image making.

Fitting for a movie about a woman who finds a new life through photography, Everlasting Moments features stunning images: A streetcar looming out of a wall of fog; the shadow of a zeppelin gliding across a courtyard; a family bouncing around a bedroom, all wearing Charlie Chaplin mustaches. This rich, emotionally powerful film begins in 1907 in a Swedish port, where Maria Larsson (Maria Heiskanen) struggles to raise her four children with little help from her boozing, womanizing husband Sigfrid (Mikael Persbrandt). By accident, she rediscovers a camera that she'd won in a lottery; through its lens she reinvents her confined, unhappy world as a place of warmth, hope, and spiritual transcendence--and begins a furtive, yearning romance with an older photographer who gives her supplies from his studio. Everlasting Moments covers decades of Maria's life, capturing not only her character but the character of the times in which she lived--an era of social unrest, world war, and personal upheaval. Yet despite this dense story, the movie feels relaxed and unfolds with the easy command of writer/director Jan Troell, whose films have won dozens of awards around the world, though he is little-known in the U.S. With any luck, Everlasting Moments will bring him some much-due recognition. --Bret Fetzer