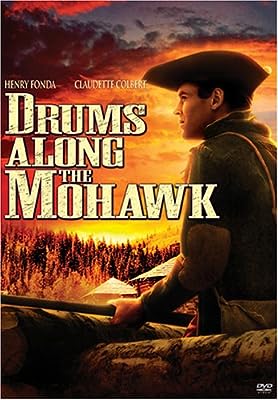 Price: $14.98
As of 2021-09-26 04:40:14 UTC (more info)
Product prices and availability are accurate as of 2021-09-26 04:40:14 UTC and are subject to change. Any price and availability information displayed on http://www.amazon.com/ at the time of purchase will apply to the purchase of this product.
Availability: Not Available - stock arriving soon
Buy Now from Amazon
Product Information (more info)
CERTAIN CONTENT THAT APPEARS ON THIS SITE COMES FROM AMAZON SERVICES LLC. THIS CONTENT IS PROVIDED 'AS IS' AND IS SUBJECT TO CHANGE OR REMOVAL AT ANY TIME.

Lawless frontier. Indian attacks. Settlers protecting themselves the only way they know how-with guns and courage. In the years before the Revolutionary War, the East was as wild as the West would be one hundred years later. Henry Fonda delivers one of his most memorable performances ever as a young frontier leader protecting his family in the backwoods of New York state. Claudette Colbert so-stars as his spirited wife. With a fine supporting cast that also includes Edna May Oliver and John Carradine, this is one of John Ford's most exciting historical dramas.

Nineteen thirty-nine is often proposed as the movies' halcyon year, and three reasons why were directed by John Ford: Stagecoach, Young Mr. Lincoln, and Drums Along the Mohawk. In that exalted company Drums... would have to be accounted "merely superb"--even if it's the best film ever made about the American Revolution and, oh, only about eighth-best picture of its year.

Henry Fonda and Claudette Colbert play newlyweds in New York's Mohawk Valley at the time of the Revolutionary War. That war is more a distant rumor than a direct concern of people with cabins to raise, crops to harvest, and firstborn on the way. When it comes to their valley, in the form of hitherto-peaceable Indians whipped up by a gaunt Tory with an eyepatch (John Carradine), life changes as though with the passing of a cloud shadow.

In this, his first color film, Ford created indelible images of the dawning of America: a lone wagon making its way through acres of long grass rippling in the wind; the Indians, at the onset of their first raid, seeming to materialize out of the mist, out of the very trunks of trees; a ragged line of farmers with flintlocks passing along a split-rail fence, then resolving into a column, an army, marching toward a distant horizon. (Utah's Wasatch mountain country stands in persuasively for upstate New York in pioneer days.) Edna May Oliver scored a best-supporting-actress Oscar nomination as a memorably crusty frontier widow, while Ward Bond--oddly omitted from the opening credits--claimed a place of honor in the John Ford Stock Company playing Fonda's best friend. --Richard T. Jameson