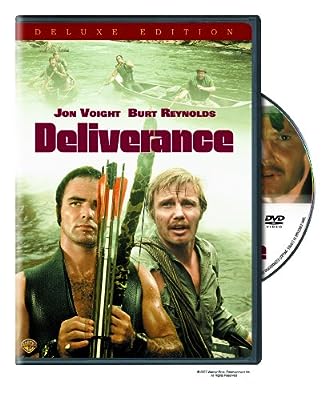 Price: $5.97
As of 2021-09-24 17:17:29 UTC (more info)
Product prices and availability are accurate as of 2021-09-24 17:17:29 UTC and are subject to change. Any price and availability information displayed on http://www.amazon.com/ at the time of purchase will apply to the purchase of this product.
Availability: Not Available - stock arriving soon
Buy Now from Amazon
Product Information (more info)
CERTAIN CONTENT THAT APPEARS ON THIS SITE COMES FROM AMAZON SERVICES LLC. THIS CONTENT IS PROVIDED 'AS IS' AND IS SUBJECT TO CHANGE OR REMOVAL AT ANY TIME.

On the DVD
The single-disc deluxe edition of Deliverance has plenty to recommend it over the previously released DVD. In addition to an improved transfer, director John Boorman recorded a full-length commentary track in which he explains how he shot the famous "Duelling Banjos" scene when the boy didn't know how to play the banjo, how he was instructed to use unknown actors and came up with Ronny Cox and Ned Beatty, and how he persuaded Jon Voight to do the picture when the actor was going through a difficult time ("he told me I saved his life, , then spent three months trying to kill him"). A 2007 55-minute documentary is split into four parts: The Beginning, The Journey, Betraying the River (focusing on the "squeal like a pig" scene), and Delivered. Voight, Cox, Beatty, Burt Reynolds, and Boorman all participate, as do director of photography Vilmos Zsigmond and "mountain man" Bill McKinney. Christopher Dickey, son of the author of the original novel, James Dickey, also recounts his father's experiences with the film and how he eventually had to be asked to leave the set. Included from the original DVD are the theatrical trailer and the vintage documentary "The Dangerous World of Deliverance," which is an interesting contrast to the other bonus material because of its use of behind-the-scenes footage (rather than stills) and showing Dickey working at his university. --David Horiuchi