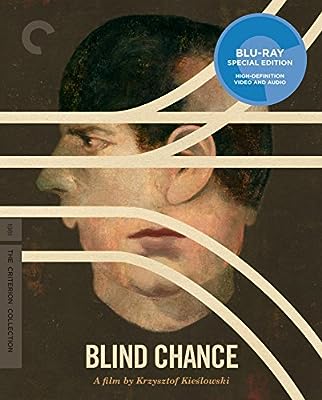 Price: $27.99
As of 2023-02-01 12:43:28 UTC (more info)
Product prices and availability are accurate as of 2023-02-01 12:43:28 UTC and are subject to change. Any price and availability information displayed on http://www.amazon.com/ at the time of purchase will apply to the purchase of this product.
Availability: Not Available - stock arriving soon
Buy Now from Amazon
Product Information (more info)
CERTAIN CONTENT THAT APPEARS ON THIS SITE COMES FROM AMAZON SERVICES LLC. THIS CONTENT IS PROVIDED 'AS IS' AND IS SUBJECT TO CHANGE OR REMOVAL AT ANY TIME.

Before he stunned the cinematic world with the epic The Decalogue and the Three Colors trilogy, the great Polish filmmaker Krzysztof Kie?lowski made his first work of metaphysical genius, Blind Chance, a compelling drama about the difficulty of reconciling political ideals with personal happiness. This unforgettable film follows Witek (a magnetic Boguslaw Linda), a medical student with an uncertain future in Communist Poland; Kie?lowski dramatizes Witek’s journey as a series of different possibilities, suggesting that chance rules our lives as much as choice. First suppressed and then censored by the Polish government, Blind Chance is here presented in its complete original form. BLU-RAY SPECIAL EDITION FEATURES  • New 4K digital restoration of the original uncensored film, approved by cinematographer Krzysztof Pakulski, with uncompressed monaural soundtrack • New interview with Polish film critic Tadeusz Sobolewski • Interview with director Agnieszka Holland from 2003 • Nine sections from the film originally censored by the Central Film Board in Poland • PLUS: An essay by film critic Dennis Lim and a 1993 interview about the film with director Krzysztof Kie?lowski