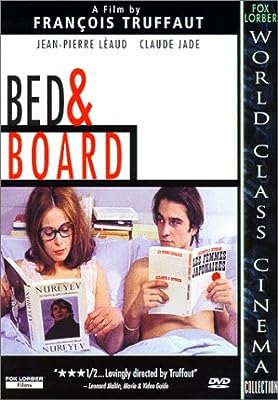 Price: $32.76
As of 2022-11-27 17:33:24 UTC (more info)
Product prices and availability are accurate as of 2022-11-27 17:33:24 UTC and are subject to change. Any price and availability information displayed on http://www.amazon.com/ at the time of purchase will apply to the purchase of this product.
Availability: Not Available - stock arriving soon
Buy Now from Amazon
Product Information (more info)
CERTAIN CONTENT THAT APPEARS ON THIS SITE COMES FROM AMAZON SERVICES LLC. THIS CONTENT IS PROVIDED 'AS IS' AND IS SUBJECT TO CHANGE OR REMOVAL AT ANY TIME.

The fourth film in François Truffaut's quasi-autobiographical Antoine Doinel cycle finds the idealistic child-man (played by Truffaut's alter ego and French new wave icon Jean-Pierre Léaud) married to his sweetheart Christine (Claude Jade) and still plugging away at odd jobs. When his experiments in the florist trade burn his bouquets to a smoky black ruin, he decides that it's time for another trade, and lands a job sending radio-controlled toy boats around a miniature harbor mock-up. It's about that time that he learns of his impending fatherhood, but he throws a monkey wrench into his new happiness when he becomes obsessed with a beautiful young Japanese woman (Hiroku Berghauer). Truffaut enlivens Doinel's courtyard apartment with the bustle and business of neighbors, creating a warm sense of community reminiscent of the works of Jean Renoir. He also pays homage to comic auteur Jacques Tati in meticulously constructed comic bits and a hilarious cameo by Tati's famous character, M. Hulot. However, he tempers the giddy screwball kookiness that characterized the previous film in the cycle, Stolen Kisses, with a less forgiving disposition toward Antoine's passionate irresponsibility and emotional impulsiveness. In one of Truffaut's finest moments ever, he plays out a conversation between the separated but still in love couple with a hard-earned sense of reflective maturity: "I love you," she confesses, "but I don't want to see you." It's a comedy with serious edges as Truffaut decides it's time for Antoine to grow up. --Sean Axmaker