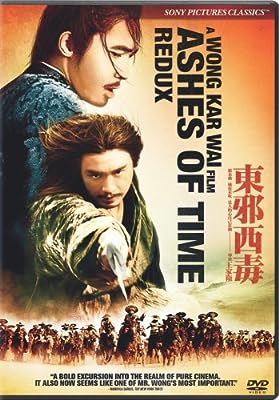 Price: $6.99
As of 2021-09-17 16:23:47 UTC (more info)
Product prices and availability are accurate as of 2021-09-17 16:23:47 UTC and are subject to change. Any price and availability information displayed on http://www.amazon.com/ at the time of purchase will apply to the purchase of this product.
Availability: Not Available - stock arriving soon
Buy Now from Amazon
Product Information (more info)
CERTAIN CONTENT THAT APPEARS ON THIS SITE COMES FROM AMAZON SERVICES LLC. THIS CONTENT IS PROVIDED 'AS IS' AND IS SUBJECT TO CHANGE OR REMOVAL AT ANY TIME.

From Director Wong Kar Wai comes the definitive version of Ashes of Time, an epic martial arts masterpiece of larger-than-life characters, breathtaking landscapes and exquisite fight scenes. The story centers on Ouyang Feng (Leslie Cheung), a heartbroken and cynical man who spends his days alone in the desert, connecting expert swordsmen with those seeking revenge and willing to pay for it. As Ouyang narrates his tale, interweaving the stories of his unusual clients, old friends and future foes, he begins to realize the mistakes of his own past, and how his fear of rejection may have led him to a life of exile.

A complicated, sparse, and beautiful film, Ashes of Time Redux is the slightly tweaked version of Wong Kar Wai’s 1994 film. Like some of his other work, the movie borrows a few characters from novelist Louis Cha, but the film is definitely classic Wong. Ou-yan (Leslie Cheung) is heartbroken, after losing the love of his life to his brother. His friend Huang (Tony Leung Ka Fai) also is broken hearted. Ou-yan provides an unusual service--he connects swordsmen with people seeking revenge. He faces a moral dilemma when he is hired by both a man named Yang and a woman named Yin to kill Huang. There is a clever secret about Yin and Yang's motives that unfolds nicely. The fight sequences are artistically choreographed by Sammo Hung and Wong lovingly presents the action in a slow motion blur that showcases the languid beauty of martial arts. Other characters meander in and out of the plot. The most compelling is a blind swordsman (Tony Leung Chiu Wai) whose wife has a connection to Huang. The storyline at times gets confusing, but the narration by the two male leads offers nice clarity. Wong chooses to keep his set uncluttered, letting the camera focus on one or two characters rather than a sea of extras. Cinematographer Christopher Doyle enhances the melancholy tone of the film by utilizing sepia tones and dramatic framing that captures an otherworldly essence. --Jae-Ha Kim