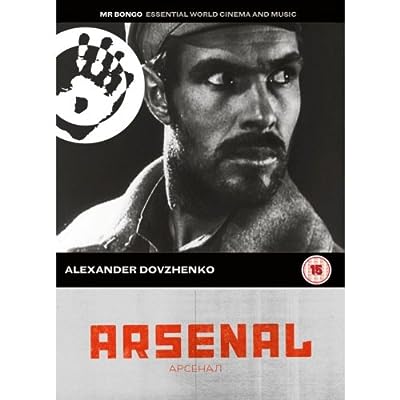 Price: $14.50
As of 2022-11-27 16:07:26 UTC (more info)
Product prices and availability are accurate as of 2022-11-27 16:07:26 UTC and are subject to change. Any price and availability information displayed on http://www.amazon.com/ at the time of purchase will apply to the purchase of this product.
Availability: Not Available - stock arriving soon
Buy Now from Amazon
Product Information (more info)
CERTAIN CONTENT THAT APPEARS ON THIS SITE COMES FROM AMAZON SERVICES LLC. THIS CONTENT IS PROVIDED 'AS IS' AND IS SUBJECT TO CHANGE OR REMOVAL AT ANY TIME.

Soldiers return to Ukraine to find their homeland teeming with strife and dissension; gripped in a conflict between nationalist forces and communists. One faction of soldiers, led by Timosh (Semyon Svashenko) supports the communists and takes command of a munitions factory at Kiev, converting the weapons arsenal into a fortress. Still reeling from the trauma of war, Timosh and his comrades engage in a violent crusade that soon spreads across the Ukraine. A country of farms and villages gives way to killing fields. Modern warfare, with its guns, bombs and trenches scars a landscape rich in hundred years' worth of tradition. A 'white hot war film' in Jonathan Rosenbaum s words, Arsenal is placed alongside Battleship Potemkin as the great revolutionary masterpiece of Soviet cinema. Its frank depiction of violence as well as its fantastic lyrical imagery established Dovzhenko as the least ideological and most experimental film-maker of his age. The reach of its influence stretches from the works of Sergei Parajanov to Martin Scorsese's Gangs of New York.

The Color of Pomegranates