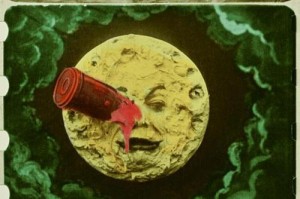 A Trip to the Moon (or Voyage to the Moon) is a 1902 French science fiction short and is loosely based on two huge popular books of that era which were H. G. Well's The First Men in the Moon and From the Earth to the Moon by Jules Verne. The film was written and directed by Georges Melies and assisted by his brother Gaston. Melies was a former magician and showman who is known mostly for directing over a hundred fantasy films using astonishing stunts and special effects for its time, which included several groundbreaking tricks with the camera. Before D.W. Griffith developed the dramatic look of film using quick cuts, close-ups, parallel editing, and long epic stories, most films of this time were less than 10 minutes long and were quick montages of daily life. Louis & Auguste Lumieres' (the Lumieres Brothers) were considered the pioneers of  'Actualities' and 'The Cinema of Attractions' which portrayed montage shorts of everyday life, outdoor landscapes, and the infamous 1986 short film Arrival of a Train, (which has been associated with an urban legend well known in the world of cinema, that when the film was first shown, the audience was so overwhelmed by the moving image of a life-sized train coming directly at them that people screamed and ran to the back of the room.)  Méliès had intended to release A Trip to the Moon in the United States to profit from it, but unfortunately Thomas Edison's film technicians, secretly made copies of it and distributed it throughout the country. While the film was still hugely successful, Méliès eventually went bankrupt. This was due in part to the eventual view which was held towards his films that the special effects were overshadowing the plot. [fsbProduct product_id='829' size='200' align='right']In an interview on the newly restored blue ray of the film legendary director Martin Scoresese states, “Georges Méliès lost basically most of his financing when the bigger companies came in. What happened here, at that time there was a lot going on with copyright and not copyright and that sort of thing. Thomas Edison and his associates were just taking the films and making dupes of them. So that was one of the reasons why Georges Méliès was finished financially, ultimately." A Trip to the Moon is the very first known science fiction film, and it used groundbreaking and innovative technology, animation and special effects, including the iconic image of a spaceship landing in the Moon's eye. Georges Melies was a talent of the imagination and of special effects and learned many creative new tricks that were never achieved before with the movie-camera.

Since the film is only 12 minutes long it's not a very complex storyline. At a meeting of a group of astronomers they design a plan to journey to the moon. You see them all together working hard on creating a space capsule in the shape of a bullet, and a huge cannon to shoot it into outer space.

When their capsule is all finished they than fire the cannon into space with the astronomers inside with the help of several woman. The moon which has facial features sees this and is hit right into the eye.

After landing safely on the moon, the astronomers get out of the capsule and decide to get some sleep. Eventually some real interesting special effects occur with the rising of the earth and stars appearing above with human faces.

Being distracted by all these occurrences in the sky the astronomers take shelter in a cave and discover large size mushrooms. One interesting scene is one of the astronomers opens an umbrella of some sort and it transforms into a mushroom itself. Eventually things get really weird when aliens of the moon appear but can be easily explode when hit over the head.

More creatures appear and the astronomers eventually become captive to their species and are brought to their master.

Suddenly the leader of the astronomers grabs the master commander alien and lifts him off the throne killing him and the crew eventually get away running towards their space capsule that they arrived in.

Being chased by the alien creatures the astronomers all make it inside while one uses what appears to be a rope to knock the capsule over the ledge of the moon and back into space. The capsule falls back to the planet and crashes into the ocean. Shortly later the astronomers are rescued and they all are rewarded as heroes and get a celebration by their own people, kind of like the celebration at the end of George Lucas's Star Wars. 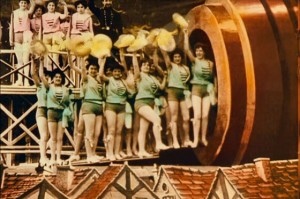 Some historians suggest that although A Trip to the Moon was among the most technically innovative films up until that time, it still displays a primitive understanding of narrative film technique. American film scholar Ken Dancyger writes, "The film is no more than a series of amusing shots, each a scene unto itself. The shots tell a story, but not in the manner to which we are accustomed. It was not until the work of American Edwin S. Porter (Who directed the 1903 short The Great Train Robbery, which is considered the very first western), that editing became more purposeful."

Although most of the editing in A Trip to the Moon is purely functional, there is one unusual choice which is when the astronomers land on the lunar surface, the "same event is shown twice, and very differently". The first time it is shown crashing into the eye of the Man in the Moon; the second time it is shown landing on the Moon's flat terrain. The concept of showing an action twice in different ways was experimented with again by Porter in his film Life of an American Fireman, released roughly a year after A Trip to the Moon.

It's been over 100 years and when the film was first released in was released in black and white and in hand-colored versions. A hand-colored print, the only one known to survive, was rediscovered in 1993 by the Filmoteca de Catalunya. It was in a state of almost total decomposition, but a frame-by-frame restoration was launched in 1999 and completed in 2010 at the Technicolor Lab of Los Angeles and after West Wing Digital Studios matched the original hand tinting by colorizing the damaged areas of the newly restored black and white.

The restored version finally premiered on May 11, 2011 with the help by director Martin Scorsese. Eighteen years after its discovery and 109 years after its original release, A Trip to the Moon was presented at the 2011 Cannes Film Festival, with a new soundtrack by the French band Air. It has now been released on blu ray and DVD by the company Flicker Alley with includes a documentary The Extraordinary Voyage about its restoration on 10 April 2012.

The final sequence depicts a celebratory parade in honor of the travelers' return, including the unveiling of a commemorative statue. This ending sequence was considered lost until 2002, when a well-preserved complete print was discovered at a barn in France. The extended version was screened at the Pordenone Silent Film Festival in 2003, and the sequence was included and restored in full for the 2012 Blu-Ray edition of the film.

Watching this restored colorized version of A Trip to the Moon beautifully restored on blu ray is a film buffs dream, just like the discovery of The Complete Metropolis a few years earlier. Even though this film isn't the masterpiece Fritz Lang's Metropolis is, it's still a fascinating and historically important film that really showed the imagination of the director Georges Melies. Georges Melies was considered more of a special effects trickery artist and a magician who decided to make this film after attending the Lumiere screening in 1895. Most of Melies films were small shorts that looked more like theatre or stage productions, (Which makes sense since most of his work he was a performer on the stage) and many of his other short films were also very impressive visually. 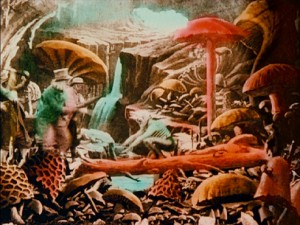 A Trip to the Moon was one of his most famous films but unfortunately most of his other work was lost throughout the years. He didn't last too long making films in his studio because films were rapidly changing in the industry and stories were becoming less about effects and trickery and more about human stories that people could relate, especially with the arrival of D.W. Griffith and stars like Charlie Chaplin. With A Trip to the Moon Melies created a beautiful fantasy with astounding special effects using such cinema aesthetics as complex visual effects, stop motion, invisible splices, superimposition, and a longer running time than most films of that era. Martin Scorsese just released his acclaimed film Hugo which is set shortly after this film was made and Ben Kingsley plays the part of director Georges Melies. I haven't seen Hugo yet because I wanted to see this film first so I could have a better understanding of the director, the film and of Scorsese's intentions. When watching the sequence in A Trip to the Moon of the astronomers hitting the aliens over the head causing them to simply explode, it reminded me of the old side scrolling Nintendo games where you can pounce on your enemies and they poof like explode. This is a historically important film especially for film buffs, and it is highly recommended to see out of curiosity and simply for the love that was taken for the people who went out of their way to restore a film, that is now incredibly over 100 years old.